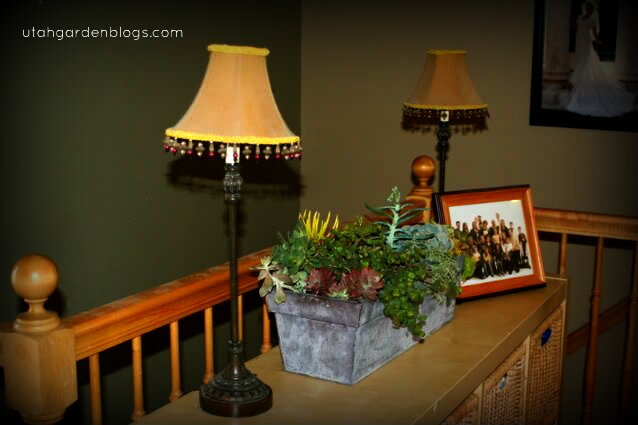 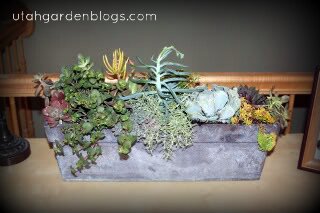 I’ve actually had a few people ask about my take on houseplants.  In general, I’m not a fan.  I know that’s surprising for someone who loves gardening but houseplants are rather like pets and require regular feeding and maintenance.  I have PLENTY of things in my life requiring regular feeding and maintenance- adding houseplant to the mix has traditionally been a bad idea.  I’ve tried it.  And failed.  Not so much because houseplants require a ton of work but rather they require scheduled maintenance and I seem to forget unless they are right in front of me.

My first attempt at growing them started well enough.  I am particularly fond of  the feeling created by mixing succulents in metal containers and so I created a lovely zinc trough and filled it with fun plants.  And then proceeded to place it in the exact WRONG location to fulfill the cultural needs with the plants.  Moments like this are when I envy the non-living accessories interior designers have to work with- sadly, plants are not something you can stick in just the right spot and have it all work as you can with a vase or lamp.  I had hoped the plants would live happily in the location because the vignette they created was exactly the look I was going for.  It worked okay for quite sometime but I made a few rookie errors in placement and container selection that made this less successful long term.

Which brings up another question- what does “long-term” mean anyway in the context of houseplants?  Months? A year?  Longer?  If it’s a matter of months or seasons, then this vignette succeeded.  At a year old, it looked leggy but still okay. I didn’t know then that the stretched out growth wasn’t the ‘norm’ but rather indicated that they were suffering from a lack of sunlight.  It’s not that I’m unaware that plants will stretch for sunlight when needed, just that these Mediterranean succulents aren’t growing outside in these parts so it’s a bit challenging to effectively grow plants you’ve never seen in their native habitat, I didn’t know what they were really SUPPOSED to look like!  By year two, it was a hot mess with only 1/2 the plants surviving and the zinc container began to rot.  Metal fails to appreciate water sitting in it and this container had no drainage- a big no-no for succulents.  I didn’t know that- THEN.  I felt guilty throwing the plants away.  Had I done a little more research- I would have learned that I could have made a bunch of fresh NEW plants from the leggy old granny plants!

Yes, I can totally see the dust on the railing in this picture. Eeww! It didn't 'show up' when looking at it IRL but it's totally there in the photo. I almost didn't write this post because of it then decided "what the heck? it just gives credibility to the "I'm too busy for fussy houseplants" assessment!

HOWEVER, thanks to the incredible Debra Baldwin and her books on succulents, I decided to try again with succulents and I’ve been having fun ever since.  Debra is the expert on this subject and has devoted considerable effort to promoting these unique plants- LONG before they became trendy.  She is also incredibly generous and has agreed to answer some questions for us on this blog later in the month- if you have any specific questions you’d like to have expert answers for, she’ll give better answers than I can.  If you have such a question, leave it in the comments for this post and I’ll add it to the list! Gray-leaved Echeveria 'Topsy Turvy' with yellow-hued Sedum in the foreground and a hardy Sempervivum provides the burgundy color in the background.

In any case, what I’ve learned since those first attempts is that succulents are the PERFECT plants for busy people.  When we interview Debra, we’ll ask general questions about culture, propagation and troubleshooting for those of us who LACK the ideal climate to grow most of the varieties outside and must enjoy them indoors- through the winter at least!  Succulents are inexpensive and there is a fabulous selection available at Lowe’s and Home Depot if you are patient and check back regularly, you can build a lovely collection.  Many of my plants have come from Cactus & Tropicals here in town- they have a gorgeous store and excellent selection.  Prices on small plants are very competitive with other places.  When I need to buy these little critters in bulk- I will trek up to J&J Nursery in Layton as their prices are significantly lower than the big box stores.  The downside is that the individual species are NOT names but since that cuts the cost in half- it’s worth it for most projects. If I were to redo this exact project again, I would select a metal container that had a plastic liner- with drainage! I would water it by pulling the liner out of the metal trough, soaking it, allow it to drain and then replace it. I know that sounds like a lot of work but in a houseplant setting you’d only have to do it once every 2-3 weeks depending on the time of year (less time between during active growth and more time while the plants are ‘dormant’). I would also have used a different planting medium than potting soil with gravel in the bottom. The gravel was good but potting soil which contains peat moss (and most of them do) should be avoided as the peat moss is hydrophobic and creates problems. Instead, mix some fine gravel (decomposed granite or even the rock used for fish tanks), some orchid growing soil which is mostly bark- remove the big pieces, and some coconut coir. I suppose a little succulent potting soil is not terrible but I haven’t found one yet that doesn’t have peat moss in it. 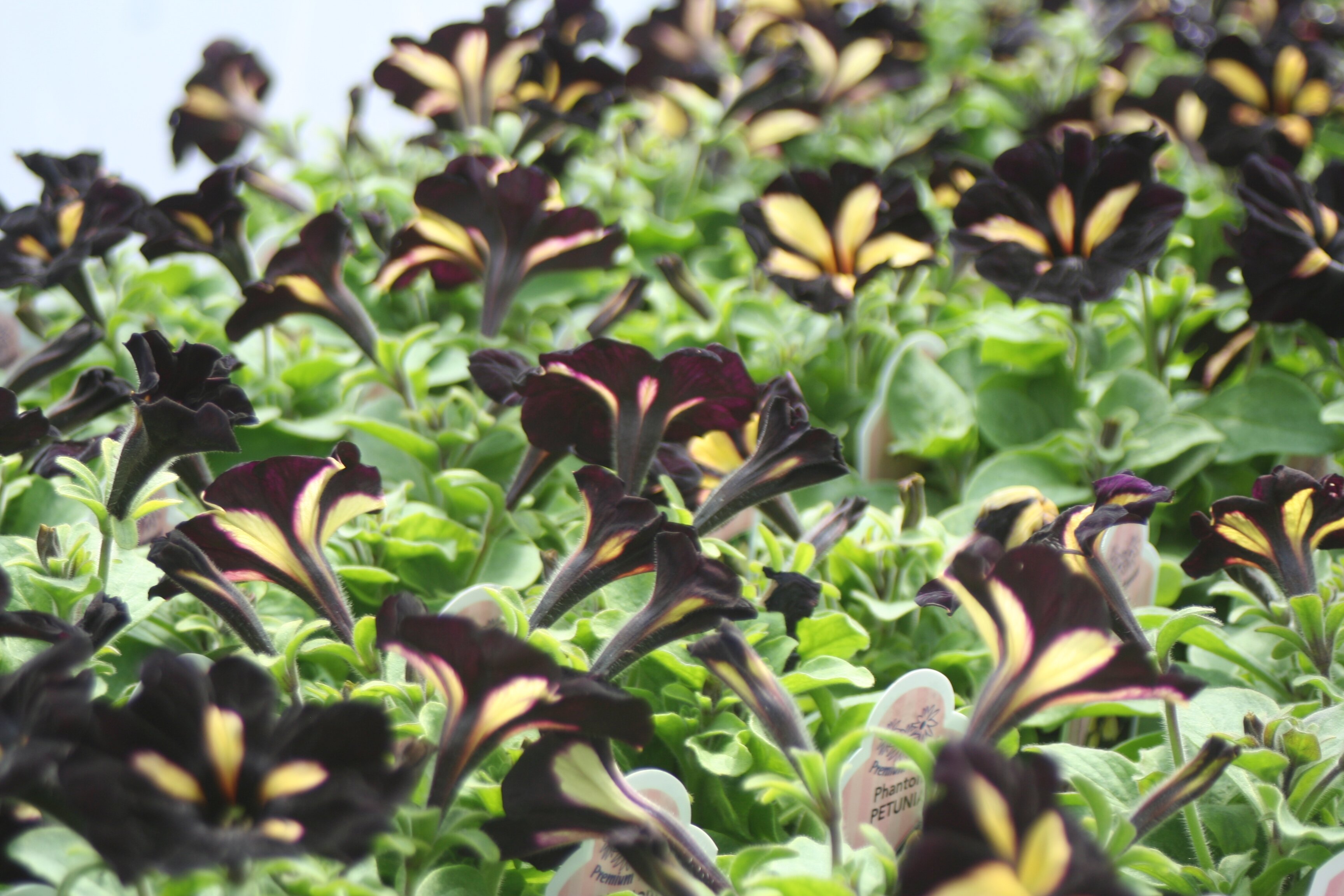 Outside Inside: Living Arrangements NOT Houseplants 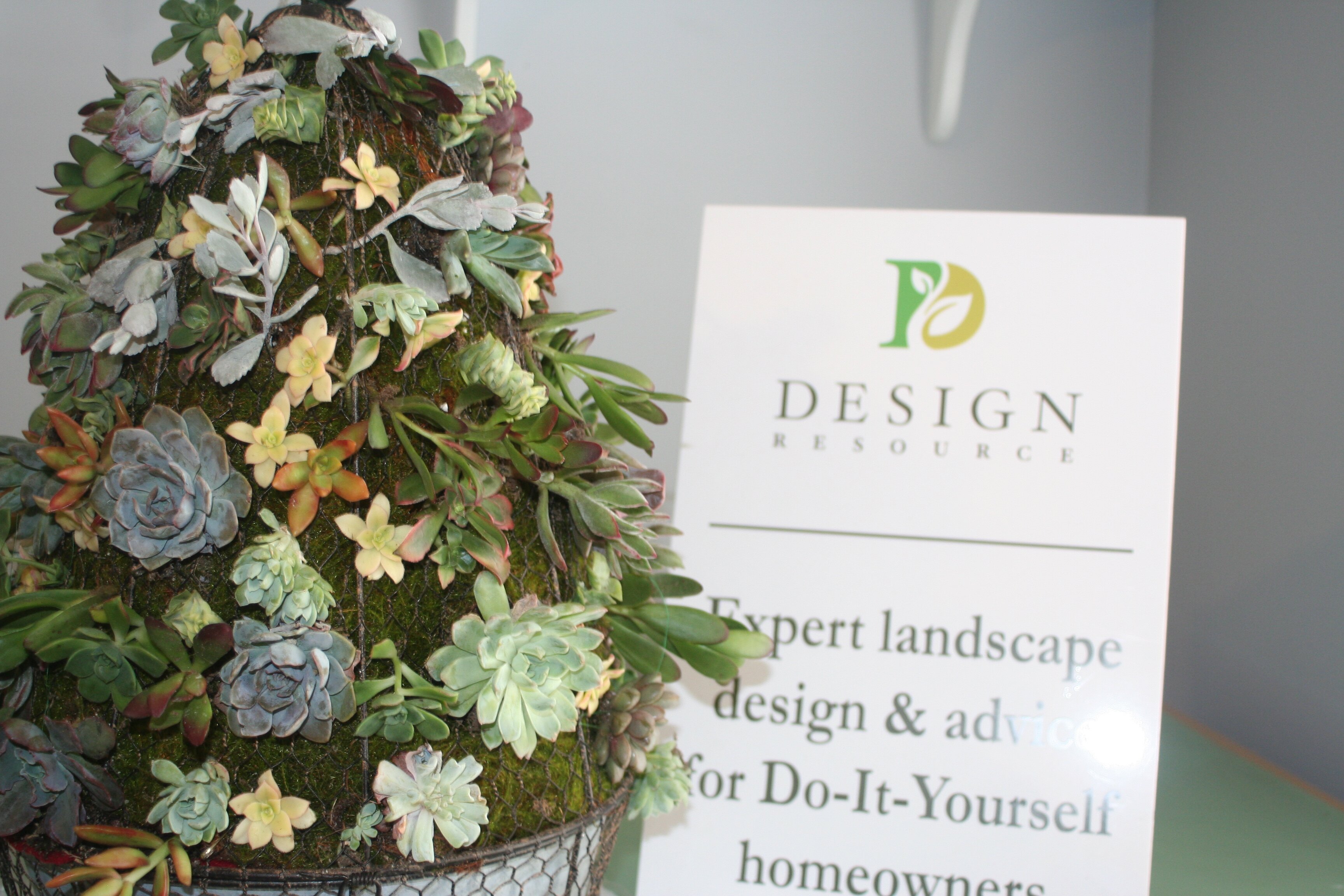